Con on the Cob 2018 After Action Debriefing 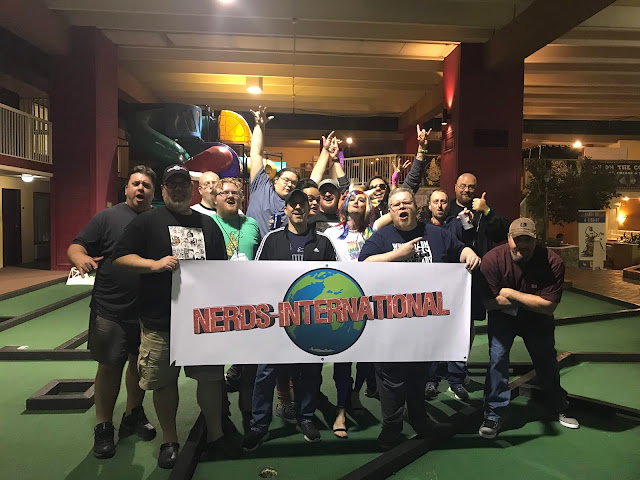 First I need to thank everyone who showed up and made this convention special. You guys are the best friends ever!

2018's Con on the Cob was a great success for the Nerds-International crew this year, at least in my opinion. I got to see some new faces and a whole bunch of old ones. Some alcoholic consumption may have been involved also. The daily schedule were games from 9am-1pm and 3-7pm. Afterwards we usually just sat around and chatted while playing pick-up games of Zombie Dice, Epic Spell Wars, Spank The Yeti, and Joking Hazard.

This year I only ran one game and I had a blast running it. I chose to try running Blood In The Chocolate, a Lamentations of the Flame Princess adventure written by Kiel Chenier. This Willy Wonka chocolate factory was fun for everyone who played. The goal is for the characters to collect several items for a French merchant who wants to steal the secret recipe for this addictive chocolate. In this particular scenario, the players never crossed paths with Lucia, the owner of the chocolate factory. They muddled their way around the factory collecting the requested items until the opened a trapped safe where the recipe book was destroyed by a sulfuric acid trap. They also found 40,000 in gold bars so they called it a day and escaped the factory by rappelling out of a window on the second story. During all of this, one of the characters swelled up like a blueberry and another contracted the peanut brittle throat disease. This is one of those adventures you could run several times and still have a blast with.

One of the nights we guilted Gary McCalum into running ICRPG for a few of us. Unfortunately, it was a short-lived game since Gary was still really tired from not enough sleep and James Clarke laying across the table for a photo op. Gary did a great job up until that point. Overall I'm still not sold on ICRPG. When I asked Jaime what he thought of it after playing in it on The RPG Brewery, he said it felt too much like a board game to him. I would agree after thinking about it for some time. I never liked the mechanic of one person at a time taking a turn all the time. When Jaime said board game that hit home for me. It does feel that way. I'd rather play Descent or Dark Tower than ICRPG.

I think the best game of the con that I was in was Tony Fanning's Genesys Deep Madness. We played as characters sent into an underwater complex to recover survivors and an unknown artifact. While the FFG system isn’t new to me, this game did feel different thanks to Tony's madness rules he created. It is much like the critical injury list but is dramatically different. Once you fail fear checks and accumulated 5 insanity points, you would roll on his chart and gain an insanity. This was such a great game even if we players removed some of the feeling of direness due to crazy antics.

Another notable game was Eric Lameroux's Trailer Park Shark Attack written by Karl Keesler. At first I was unsure how this game would play out. I was confident I would like it because it uses Savage Worlds but what I wasn’t sure about was the very nature of the game. Eric told us up front that your character will die. He came prepared with 24 pregenerated characters so we could respawn when we died. This game felt gonzo from the get go where I started out as a midget drug dealer with a Napoleon complex, watching Jerry Springer in my trailer when the levy broke. The trailer park gets flooded and we have to survive electric sharks. Eventually we find out that the sharks are alien inventions and the aliens crashed their flying saucer into the levy. After making our way to the ship we failed to stop the imminent alien invasion. What can I say, it's Savage Worlds, great game. 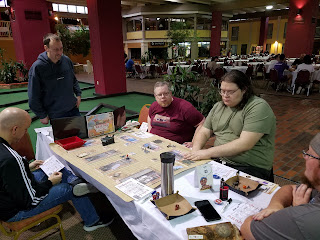 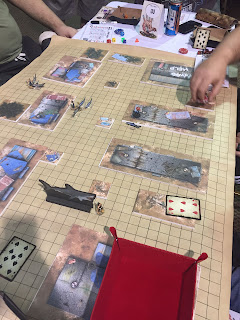 I also got to try out Legend of the Five Rings Beginner Game. I had no idea what to expect since I have no prior knowledge of this game. I knew it was made by FFG so it couldn’t be horrible. This was a fun game but I doubt I'd ever get to run or play in this game again. It's Japanese cultural inspiration is amazing but the game felt almost too narrative to me. There is a dice mechanic involved but the game plays more like a story telling session. The world of Rokugan is great and I would absolutely love to read this just for the background info. The dice mechanics were easy enough to pick up that I was able to grasp it within a few rolls. This game definitely requires the right people to play with. I really enjoyed this game and would recommend it even though it lacks solid dice mechanics. It might not be the dice mechanics but there is something about this game that is missing for me. 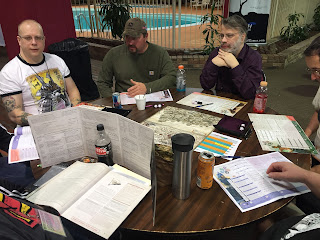 I finally got to try out Dungeon Crawl Classics. I've had the book on my shelf for a few months but haven’t had the time to read it yet. When I heard there was a slot open for this game ran by Harrison Hunt I jumped at the opportunity. As is usual for Harrison, he put on a great game. We started out by taking a job to help out a tavern owner by getting rid of a small problem for them. Then when we kill the perpetrators we find a sealed talking coffin. The mysterious man in the coffin tells us that there is an enormous amount of wealth and jewels in a far off cave. Of course we will save the world for you. Now I have to drag around this coffin all over the place because we can't open it. Finally, we make it to the cave where some dude touches an obelisk and grows like 50 times his normal size. Needless to say, we saved the world. The only problem I had with this system was the Deed mechanic and my unfamiliarity with the system in general. I kept getting confused on what to roll and when. 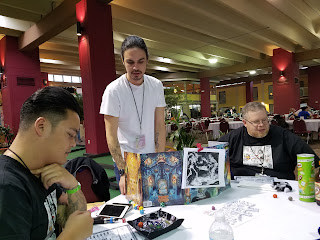 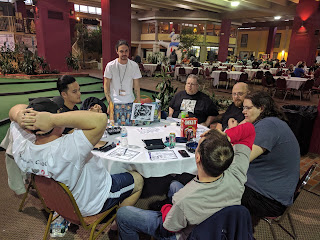 I'm a fan of FFG's dice system in general but it does have its shortcomings. The next two games I'm going to mention both use it. Jaime Pearson ran us through some Realms of Terrinoth using the Gen Con adventure from last year. This was a fun game and I'd say this would replace D&D 5th edition for me if I could find a game to play in or run. I'm not a huge fan of 5th edition much anymore. It is a good game but it just feels like the same old game that they keep changing and resleeving to make more money. Enough on that though. Terrinoth feels like a great high fantasy setting and the magic system from Genesys is unrivaled in my humble opinion.

The last game I played in was another one of Tony's concoctions. His Star Wars game was a continuation of last years Vanguard Squadron game. Vanguard Squadron was one of his campaigns he ran for his home group and he loved the characters so much that he started his own convention game. In this episode, the squadron is sent to recover survivors from a cave on Hoth. Well, we ran into a few Wampas. In fact, one threw me against a wall and nearly killed me at the beginning of the game (Tony had fun getting revenge on me from last year). Once we saved a couple of survivors we find out that Vader is landing and we need to provide support to fleeing transport ships by escorting them past the blockade. Once in our ships we had no problem escaping the star destroyer’s gravity well after our ace YT-2400 pilot caused a rebellion on the star destroyer (a special talent of his). This game took second place for me behind Tony's other game. Tony is truly a remarkable GM. If you have a chance to play one of his games don't pass it by. 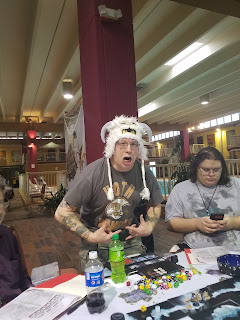 There was also a Stephanie sighting. Our friend Stephen Dragonspawn did some cosplay on Saturday night and stole the show. This was definitely the pinnacle of the weekend. Thank you Stephen. I think some pictures will say it all for me. 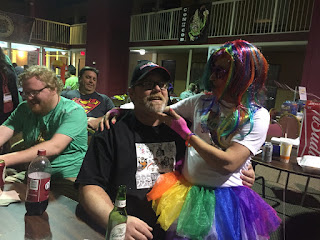 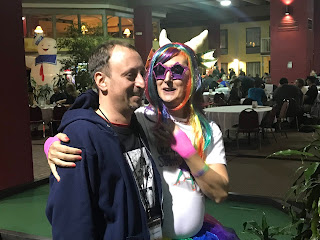 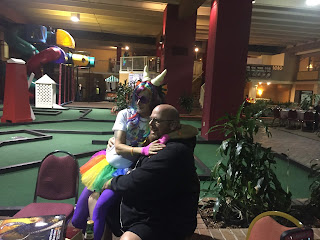 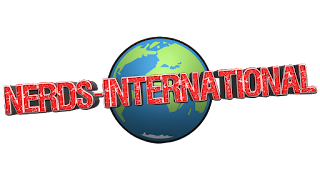 Proud to be a member of the Nerds-International MeWe community